INQUIRING ABOUT THE WORLD 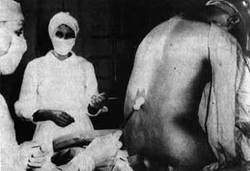 What are ethics and why are they important?

Research before the 1930's was often very intrusive. The disease syphilis is a bacterial infection that has been seen in patients for hundred of years, it was reported that Henry VIII had this disease. But not much was known about the progression of the disease so in 1929  when the  disease was identified in 412 Negro Americans from Tuskegee the United States Public Health Authority was authorised to follow the disease in these individuals. Later know as the Tuskegee Effect. They told the men that they had come to identify their 'bad blood' . This notion of bad blood was related to a number of maladies and no one related it specifically to syphilis.

These men were tracked by successive medical teams and this was sanctioned by authorities until 1972 and throughout that time with the advent of penicillin and the use of the antibiotics for years in the wider community these men were never offered treatment. In the final stages of the disease when the brain is infected by the bacteria and painful symptoms set in these men suffered and 327 died of the disease UNTREATED.
When in 1972 the Tuskegee Project was made public and outrage ensued and a review was launched. The result was the Belmont Report which changed the way research was carried out and ensured ethics was much more stringent.

The Question to consider are what are ethics and why are they important?